The business, which was founded in 2005, recently relaunched its holiday comparison marketplace at the same time as announcing partnerships with many of the UK’s leading travel brands such as TUI, Jet2 Holidays, Travel Republic and Love Holidays.

Hitwise, the leading market intelligence platform, compiled the analysis alongside icelolly.com and measured the monthly rise and fall of traffic visiting key brands across the travel comparison market in the UK, relative to an April 2017 benchmark.

Of the six brands included in the analysis, icelolly.com increased its share of market faster than all others during the first quarter of 2018, outgrowing the likes of Kayak, Travel Supermarket and HolidayPirates.

Ross Matthews, CMO @ icelolly.com, said: “We’ve had a great start to 2018 and the analysis released today speaks for itself. To have outgrown our peers in such a competitive market is a great achievement. We’ve always punched above our weight versus those with significantly larger marketing budgets and, as a challenger brand, we’re constantly looking at new ways to acquire the right audiences.  We have to consistently get this right to ensure we continue to deliver value for our advertiser partners, and we’re delighted that these latest figures show we are achieving this.”

icelolly.com announced a tie-up with ITV earlier this year, most recently sponsoring Keith & Paddy’s Picture Show on Saturday nights through March and April. The brand also partnered with McDonald’s in April for their nationwide Monopoly campaign.

Founded in 2005, icelolly.com is now the UK’s fastest growing holiday comparison website according to Hitwise data Q1 2018, with more than 20 million visitors each year generating over 40m search queries annually.  Users of icelolly.com can compare millions of great deals on package holidays, cruises and UK breaks from the UK’s leading travel companies. All holidays advertised in the icelolly.com marketplace are ATOL protected. Being able to compare deals from more than 30 different travel companies, who add their best offers daily, allows customers to save time researching their holiday and save money, making icelolly.com a firm favourite with British holidaymakers.

Methodology: Monthly market share data from Hitwise April 2017 to April 2018 was used in this analysis for the named brands. Data was indexed at April 2017 and subsequent growth or decline in a brand’s market share was measured via this benchmark. Indexing data allows a quick determination to be made regarding relative rates of growth or decline by looking at a chart’s vertical axis. 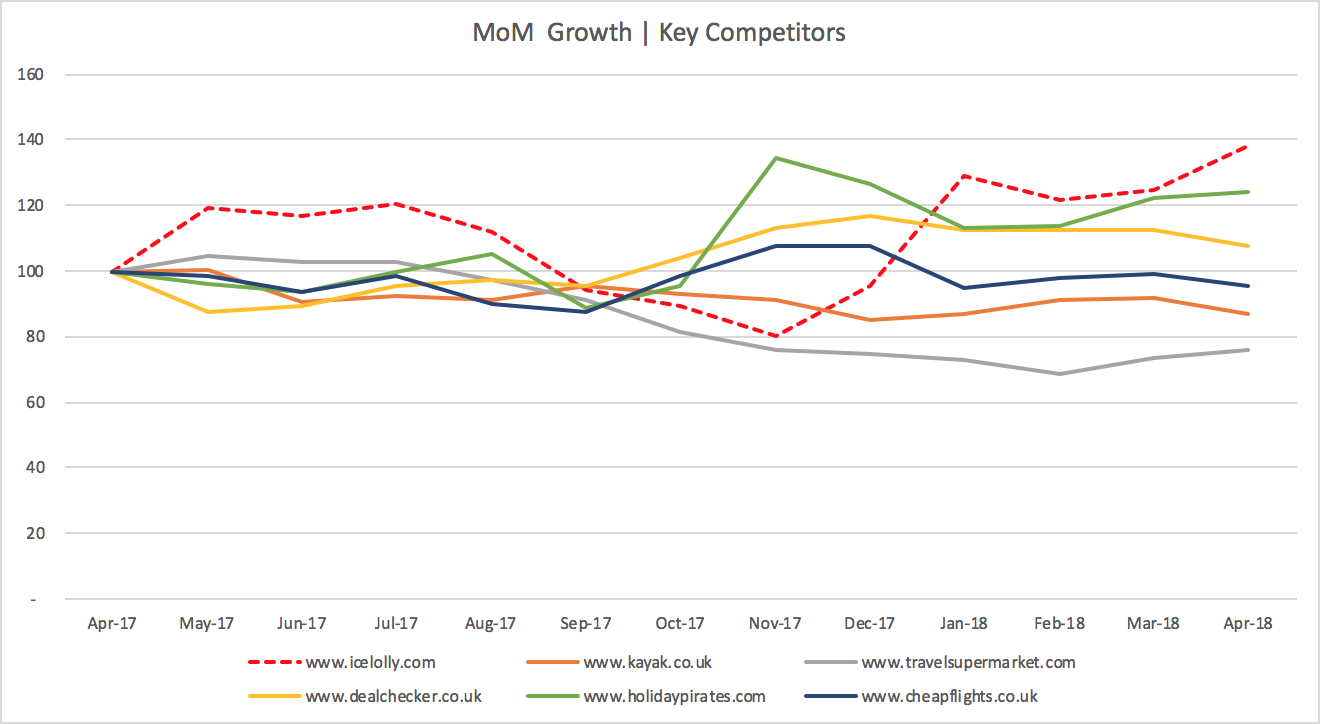